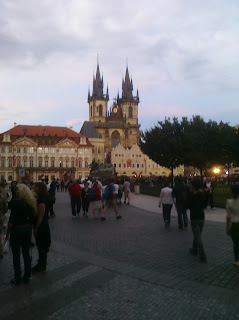 Here’s the view from outside the Hotel Rott, where I’m staying this week for the World Shakespeare Congress.  The hotel is in the center of the old city, between Kafka’s house and the Hard Rock Cafe, which makes a nice metaphor for Prague’s cultural mix.  Heard a talk on translating Shakespeare into Czech this morning at the opera house where Mozart’s Don Giovanni had its debut.
About Steve Mentz 703 Articles
I teach Shakespeare and the blue humanities at St. John's in New York City.